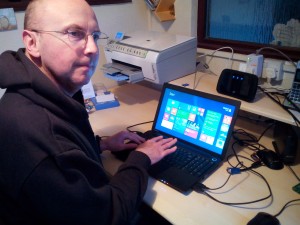 Mick is one of our oldest customers (He won’t take that the wrong way). We’ve been looking after his HP desktop for some years. Finally the time came to send it to the PC graveyard in the sky and upgrade. We recommended a new Toshiba Laptop that comes with the latest Windows 8.1 operating system. It would be portable enough to enable Mick to sit in front of the TV or take away with him, but beefy enough to be able to meet his requirements. We were able to provide a great quote, and then installed the machine on the customers premises. We made sure that the PC had the latest security updates, has an operational firewall and anti virus program, and was connected to their wifi. As a bonus we were able to connect the slightly old printer to the broadband hub enabling anyone connected to their wifi to print from anywhere in the house !! Commenting on the service from Technology Gurus Mick said “I’ve been using Technology Gurus for some time so I knew I could rely on a great service and price. I would have no hesitation in recommending them.”

Technology Gurus comment – Great to be of service to you again. Another satisfied customer. Excellent ! 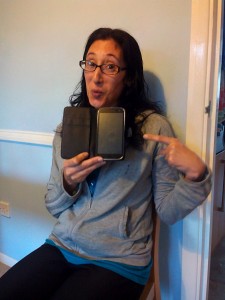 One of our mobile customers Yasmin had an old smartphone, and needed something to enable her to work better on the move. One of the requirements was to be able to work on the train when travelling to clients. It was important to get emails and create and edit documents on the move. Initially Yasmin was interested in a Samsung tablet weighing in at around £450. We suggested a new smartphone bigger than her existing one but smaller than a Galaxy Tablet would ideally suit her requirements Yasmin liked the idea of saving a couple of hundred pounds AND getting a device that wouldn’t look out of place when travelling. Yasmin commented “I have had this phone the Android Wiko Cinq Five now for the last 3-4 weeks. I am really enjoying using it. The screen is clear and bigger than my previous phone. I like that my emails are coming through without a problem. As I freelance I need to know what jobs are coming through asap. The camera on the phone is brilliant, the pictures are lovely and clear. I am still learning how to use all the other functions. Steve’s customer service is brilliant, I did have a few user problems to begin with, and he was happy to resolve them for me and also had the time to spend to show me the basics of how the phone works. Thanks Steve for your time and recommending this phone.”

Andrew had a HP laptop that he had dropped ! The screen was smashed and it didn’t work. We managed to get a replacement screen at an affordable price and fitted it. Andrew was saved having to buy a new laptop.

Technology Gurus comment – Glad to be of service Andrew

Gus has used us for publishing and printing consultancy as well as support for his PC. His book about his experiences “The Modern History of Berkhamsted Golf Club”  is currently available from our ebay shop. Gus commented  “This is the service I was looking for, first class. Everything was explained clearly and carefully, and in a very professional manner. I could not have asked for anything more, I would certainly will be using them again, and recommending them to my family and friends.” October 2013

Pam’s Skype wasn’t working and talking it over on the phone it was clear we needed to get access to the keyboard. So we setup a remote access session, Pam allowed us to take control of the keyboard, and we quickly identified the problem. Pam now doesn’t have to visit her local PC shop as we can fix it remotely.

Technology Gurus comment – Amazing to see your mouse moving around without touching it isn’t it Pam ? 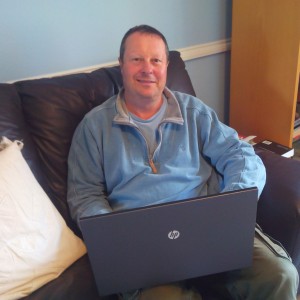 Andy had a problem with his laptop not booting up. He couldn’t use the PC, and was worried he might lose his information. The local PC shop had said it could be a virus and they had had several of these in. They wanted £80 to re-install the operating system and applications. A little suspicious, Andy asked us to help. We quickly identified there was no virus, fixed the problem, and charged Andy a fraction of the price quoted elsewhere. We also made sure the PC was in tip top condition by checking that all of the security software was working, and the firewall and anti-virus programs were up to date for free. Andy was so pleased he posed for this photo !

Technology Gurus comment – Sometimes a local shop will feel it can charge what it likes. A personal recommendation counts for more.

Andy’s laptop wouldn’t stay connected to wi-fi and was running slowly. We were asked to sort it out. We uncovered loads of “stuff” that had been downloaded unwittingly and messed up the smooth running of the system. We cleared it off and ran several tools that resulted in it running faster and staying connected to the wifi.

Don’t just take our word for it. Look at our excellent feedback on Google

If you need a service like those above, drop us and email and we’ll get in touch and talk over how we can help YOU.